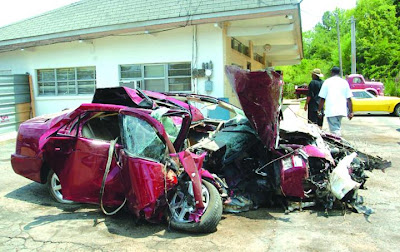 "It's hard not to see GM's bankruptcy as a signal moment in a larger history. If mighty GM can fail, cannot also the United States? And the answer is, absolutely." The company's stark decline is "a rebuff of the notion of exceptionalism," notes Neil. "Any organization that fails to sufficiently safeguard its means of self-correction and reform, that forsakes long-term investment for short-term gain, that piles up debt year after year, will eventually fail, no matter how grand its history or noble its purpose.""

What's good for GE? Did you mean GM?

Looks like we might be next in line if government spending continues at the same level for any length of time.

My name is Mrs. Monica Roland. I live in singapore and i am a happy woman
today? and i told my self that any lender that rescue my family from our
poor situation, i will refer any person that is looking for loan to he gave
me happiness to me and my family, i was in need of a loan of 25,000 pounds to
start my life all over as i am a single mother with 3 kids I met the GOD
fearing man loan lender that help me with a loan of 25,000 pounds,he is a GOD
fearing man, if you are in need of loan and you will pay back the loan
contact him tell him that is Mrs. Monica Roland that refer you to him.
contact Mr Prudent nary via email: (erivanloancompany@yahoo.com)

Hello everyone, My name is Mrs. Linda Frank and i am talking as the happiest person in the whole wild world today and i told myself that any lender that rescue my family from our poor situation, i will tell the name to the whole wild world and i am so happy to say that my family is back for good because i was in need a loan of $ 73,000 USD to start my life all over as i am a single mum with 2 kids and the whole world seemed like it was hanging on me until i met the GOD sent loan lender that changed my life and that of my family, a GOD fearing lender, Mr. Steve of Steve Brown Loan Financial , he was the saviour GOD sent to rescue my family and at first i thought it was not going to be possible until i received my loan of $ 73,000 USD and i will advise anyone who is in genuine need of a loan to contact Mr. Steve Brown via email at. (stevebrownloan4@hotmail.com) OR (stevebrown012@gmail.com ) because he is the most understanding and kind hearted lender.

I am Mrs Shelly by name, i live in Uganda, i have two children a boy and a girl.When i was trying to get a loan to arrange my life and to start a business i was scammed 5times by different fake lenders in different countries and in this process i lost a lot of money, i have no hope anymore in life.Until God Almighty finally sent a messiah to me who helped me to clear all my financial mess and distress, he is a God fearing legitimate lender, i saw your email address on the financial basic site and really felt that you need some little advise and direction, so i decided to help you so that you can be happy the way i am today with my family.You can email him by this email address: (amacoloancompany@gmail.com) It just an advise from me and God bless you

Good Day, Are you in need of financial assistance? Have you thought of obtaining a loan? Probably you have been turned down by your local banks in quest of getting a loan. Search no further, we are currently offering long and short term loans to the public at large. We can help you with a loan at a very low interest rate.Email us Now zumaloans@mail.com or zumaloans@gmail.com

We are a financial consultants that handles international finances for any amount of banking instruments. What about finding a reputable Debt Consolidation firm that can assist you in reducing monthly installment so that you will have affordable repayment options as well as room to breathe when it comes to the end of the month and bills need to get paid? Dr. Chris Gethard Loan (chrisgethardloan@gmail.com) is the answer. Reduce your payments to ease the strain on your monthly expenses. Feel free to engage our leased facilities as We have provided over $2 Billion in business loans to over 25,000 business owners just like you. We use our own designated risk technology to provide you with the right business loan so you can grow your business. Our services are fast and reliable, loans are approved within 24 hours of successful application.

We offer loans from a minimum range of $5,000 to a maximum of $500 million, CHRIS GETHARD LOAN services Will give you loan with an affordable interest rate of 2% and loan duration of 1 to 30 years to pay back the loan (secure and unsecured). Our aim is to provide Excellent Professional Financial Services. Intermediaries/Consultants/Brokers are welcome to bring their clients and are 100% protected. In complete confidence, we will work together for the benefits of all parties involved. Do not keep your financial problems to yourself in order for you not to be debt master or financial stress up, which is why you must contact us quickly for a solution to your financial problems. It will be a great joy to us when you are financially stable
Email us via: chrisgethardloan@gmail.com

We are certified and offer fast and reliable services


Are you Looking for a business loan, personal loan, loans, auto loans,xmas loan
student loan, debt consolidation loans, unsecured loans,
venture capital, etc. .. Or denied a loan from a bank or financial
institution for one or more reasons.You are in the right place to take
your loan solutions! I am a private lender, I give
loans to companies and individuals at low and affordable interest rates
of 2%. Contact us today via :amaizenloan@yahoo.com

NOTE: This is required before you can proceed with the credit
transaction is good.

We provide BG, SBLC,and lots more for clients all over the world.

We are equally ready to work with Brokers and financial
consultants/consulting firms in their respective countries.

We offer certifiable and verifiable bank instruments via Swift Transmission from a genuine provider capable of taking up time bound transactions. We are RWA ready to close leasing with any interested client in few banking days