"Look at the rest of the country— we're paralyzed with anxiety about the ensuing economic collapse and environmental chaos. We're so afraid, we smell bad. In the Gulf, in New Orleans, everyone left standing has BEEN there and DONE that. And they've got the Army Corps of Engineers tattoo on their shingle to prove it....

The fact that Southern Louisiana and Mississippi are still standing, partying, fucking, cooking, and making music together, is testimony to a human spirit that survives out of sheer spite— and true love. This is a community of survivors. They're the early adopters of Armageddon. I found it relaxing."

"A Dozen Governments Will Fall"

Last night I went to the following event (video here):
On Thursday, April 24, the Museum of American Finance (did you know there was one?) will host a panel discussion entitled "Finance, Energy & the Environment: Changing Markets &
Opportunities to explore the sources of power that will be keeping the lights on and filling investors' pockets in the next five years."

I always find these discussions somewhat surreal because of the wild contrast between recognizing the gravity of the planetary threat of climate change, and business-as-usual discussions about IPOs and whether people will accept higher utility rates. Are we saving the planet here, or are we just rosining our bows and shining up our fiddles?

Also clear was that solutions were abundant, even if the will to implement them isn't immediately in evidence. In presidential politics, the panelists pointed out, global warming is way down the list.

There's such a frustrating gap between what's available and possible and what we are actually acting on. Countless energy alternatives were mentioned, including carbon sequestration, new co-generation and combined-cycle power plants (wind +gas, solar+coal), pricing efficiency, nuclear. Also discussed were the intricacies of a potential carbon market in the US. There was a lot of healthy disagreement between the enviro guy and the three investor guys that didn't always line up in a predictable way.

Abbasio mentioned the famous Stern report that concluded that the real cost of addressing emissions amounted to 1% of GDP, while the real cost of NOT addressing emissions and allowing global warming to proceed ranges from 5 to 20% of GDP over the next few decades. This is the cost in the existing market, without any fancy pricing of externalities like clean air or drinkable water or health care.

Pope spoke movingly of the Sierra Club's transition from a conservation-focused group to a more activist one, working not only "to stop bad things" but "to make good things happen faster." (Apparently a price on carbon is one of those good things). He also made a prediction that made me sit up. He said between now and November when the next president is elected,

"One dozen governments around the world will fall because of the food crisis, including some that are very important to American security."

Yikes.
Don't know where he got it from, but you heard it here first.
Posted by Anya at 8:50 AM No comments:

Saving for your Future

The Green Planet (Without All These %$#@! People)

Excellent essay (by my college classmate Rebecca Onion) on the limits and dangers of eco-topian post-apocalyptic dreaming by the likes of James Howard Kunstler (whose Clusterfuck Nation wins Best Blog Title, but whose new novel sounds like a sexist mess.)

"In the perfect green apocalypse, population reduction leaves a world in which everybody wins—birds, bees, and people."

Elitist dreams of how great things would be if all the Hummer drivers went away? I'm guilty, as are many of my neighbors in Williamsburg, Brooklyn. Not particularly helpful.

At the same time, I've talked to people who came close to this experience, in the brief hours of the New York City blackout in 2003, and more so in the weeks-long aftermath of Hurricane Katrina, and did indeed discover unexpected inner strength, the value of hard work to meet basic survival needs, and a sense of community and freedom they'd never known. I don't think it's a bad thing to imagine an America that might be different, in a good way, after everything that's unsustainable in our current system--corporate, consumerist, polluting, unequal--has in fact collapsed.
That's what unsustainable means, after all. If it can't go on, it won't go on. And what then?
Posted by Anya at 2:57 PM No comments:

FC Blog: The Upside of No Cheap Chinese

Crossposted from my Fast Company blog:

Recently, articles in both the New York Times and Slate have warned that American stores may no longer be so awash in supercheap Asian imports. Not only is the dollar weakening, but inflation and economic growth in countries like China and Vietnam are inexorably raising the costs of doing business. And there are few obvious backup countries ready to step into the wings as cheap manufacturing powerhouses.

We're dealing with complex global economic factors here, but I wanted to point out the potentially positive side to this shift from both human rights and environmental perspectives. The first is stated directly in Alexandra Harney's article:

"China is rolling out wage increases around the country and tightening its labor laws. Wages are rising at double-digit rates in coastal China...China's Generation Y, the children born after the one-child policy came into effect, are increasingly aware of their rights to a legal wage, health insurance, and a certain number of days off every month."

Now, I shop at Forever 21, H&M and Tar-zhay just like everyone else. But it's a pretty heartless person who would grudge their tanktops going up from $5 to $12, if the tradeoff was better working conditions for the poor in developing countries.

The possible environmental benefits here are more conjectural. Critics of globalization have devoted much scholarly ink to the outsized environmental costs of export-oriented agriculture and manufacture. Increasing volumes of raw materials and finished products are crossing the globe, with bigger and bigger CO2 trails following them in the form of airplane, ship, train, and truck fuel, not to mention the environmental impact of all those highways, roads, ports, canals, locks, bridges, and airports (see this story about the new China-financed Asian superhighway linking Cambodia, China, Laos, Myanmar, Thailand, and Vietnam.)

Global trade made economic sense despite the distance because of extremely cheap labor and extremely cheap fuel. Now that the costs are rising, just maybe, the advantages of re-localized, sustainable supply chains have a chance to come to the fore.

In the past month, the media has been jam-packed with stories about a supposed student loan credit crunch. It's true that, as a result of the general turmoil in the credit market, some lenders have decided to stop offering both federal and private, unsubsidized student loans. The requirements have also been tightened for those borrowing private loans.

But the experts I've talked to say there's no crisis. In fact, there may be a silver lining to the credit upheaval: a saner market that steers more students and families toward safer, cheaper, smaller, federally guaranteed loans.

Update: Congress has moved fast to ensure continued loan access--there's supposed to be a vote today in the House on the “Ensuring Continued Access to Student Loans Act of 2008.” According to the USSA and the PIRGs, it's a mixed bag. They like the enhancements to PLUS and Direct Loans, but not the sops to the lenders. Big picture:
"Every year, nearly 400,000 academically qualified high school graduates do not pursue a four-year education. For many of those students, cost—or fear of cost—is the main deterrent. We know some of these students, particularly those from low-income families, may be debt-averse, unwilling to take on even reasonable levels of student borrowing. In light of the real challenge we face persuading students to responsibly invest in their education, we believe any discussion of a potential credit crisis should conducted with great circumspection and care. We believe that the student loan industry and its surrogates have sought to play up the risk of a crisis in the media in hopes of reversing the cuts to their excess subsidies enacted by you just last year. While those familiar with the industry recognize the perennial game of chicken it has played with Congress over subsidies, these interest groups are sending an insidious and dangerous message to students and families around the country about access to college. " 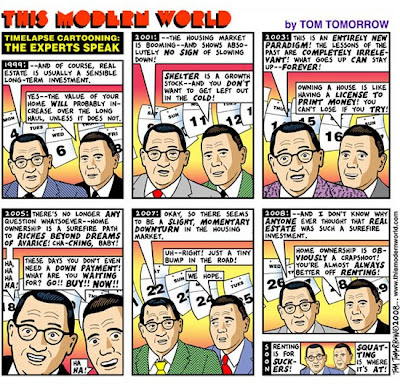 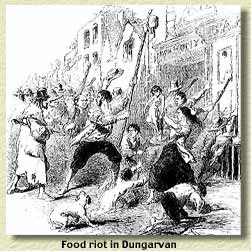 Yesterday we drove upstate to go rock climbing and stopped in the usual awesome little bakery in New Paltz to get our sandwiches. A little sign on the counter warned their customers that the price of flour, which was $8 a bag just a couple of years ago, had gone up to $30 a bag, and other foods were also more expensive. They said they were doing their best not to pass along too much of the increased cost and asked customers to understand. Since folks were lined up out the door, it didn't seem like too much of a problem yet (and my sandwich was still just $6.50). But it served as a scary reminder of the way the world is interconnected.
Krugman on rising world food prices today: Over the past few years the prices of wheat, corn, rice and other basic foodstuffs have doubled or tripled, with much of the increase taking place just in the last few months. High food prices dismay even relatively well-off Americans — but they’re truly devastating in poor countries, where food often accounts for more than half a family’s spending. There have already been food riots around the world.

Food. Riots.
Combined with yesterday's story about the revival of survivalism--in the frothy Styles section, no less--it's definitely a wake up call. Here's what I'm going to do, whether practical, ritualistic, or symbolic. -Write an essay. -Plant a better container garden this spring on our balcony in Brooklyn. -Fix my bike. -take fewer cabs. -Donate to Oxfam. -Buy 20 pound bags of rice and beans, batteries and a hand-crank radio. -Pray.
What about you?
Posted by Anya at 7:34 AM 2 comments:

My esteemed coworker David Lidsky was the only one to spot this bit on the Colbert Report last night.