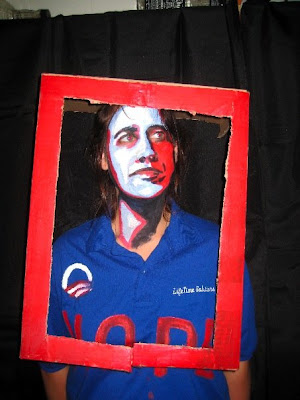 It's the end of an era that's lasted my entire adult life.
Our "long national nightmare" of war, economic collapse, and environmental destruction--well, it's far from over. But the leadership that drove us into this brick wall looks to be finally, decisively, on its way out.

For liberals, progressives and Democrats, with political power comes a new responsibility. Instead of railing at the screwups of the other side, we have to lead. We have to come up with solutions that work, and we don't have a lot of room to maneuver, thanks to the unpaid debts we're inheriting.

I think one of the crucial concepts of the new Progressive era is going to be evidence-based policy. This is when policymakers commission lots of comparative research (comparing both states and other countries) and take advantage of natural experiments to determine what really works for things like covering the uninsured, improving educational outcomes for urban kids, making our government more responsive, reducing carbon emissions, and raising retirement savings. It's an approach that unites the work of Roland Freyer, Geoffrey Canada, Cass Sunstein, & James Hansen, to name a few.

At the end of today, we will finally (finally!!) have a national leadership in place that agrees with the basic premise that the government can and should solve problems for people. And obviously we have a lot of problems.
If we focus on what works, we can maybe blunt the ideological hangover from the last eight years, and build an even stronger and more lasting consensus for reality-based progressivism.

PS. By the way, that Onion article is really incredible to read today.
"During the 40-minute speech, Bush also promised to bring an end to the severe war drought that plagued the nation under Clinton, assuring citizens that the U.S. will engage in at least one Gulf War-level armed conflict in the next four years.

"You better believe we're going to mix it up with somebody at some point during my administration," said Bush, who plans a 250 percent boost in military spending. "Unlike my predecessor, I am fully committed to putting soldiers in battle situations. Otherwise, what is the point of even having a military?"

I prefer the work of Thomas Malthus. I'm a big fan of trimming the fat... the fat being the 3 percent of folks who don't contribute to the betterment of society but rather suckle on the teet of transfer payments to subsidize a life of lazy impoverishment and rampant breeding.

Read about financial meltdown and its impact on employee appraisal at http://logi-call.blogspot.com/2008/11/anticipating-appraisal-at-time-of.html