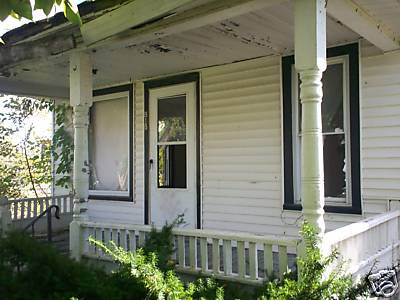 Last night I spoke to a group of students at Alma College, a small liberal arts college in the very center of Michigan, about the economic crisis and the election. This state, of course, has been one of the canaries in the coal mine of the US economy, and the students were eager to discuss possibilities for change. One young woman, an economics major, said she'd seen foreclosed homes for sale on eBay, one of which, in Saginaw about an hour from the college, apparently went to a Chicago woman for $1.75. We talked about whether they, as new graduates, would be receptive to an opportunity such as Baltimore's 'urban homesteading' program of the 1970s, which sold abandoned houses at nominal prices combined with low-interest construction loans to help people restablize and rehabilitate moribund neighborhoods. (These days, of course, you'd want to put some of the financing towards an energy retrofit). But rather than stay and make a go of it in Michigan, many of them said they were majoring in foreign relations and looking to opportunities in countries like South Africa and South Korea.

The students I sat with at dinner were equally concerned with the environment as well as the economy, which is why it's little surprise most of them opposed the bailout bid of Michigan's largest company, General Motors. "If they can't make efficient cars that people want to buy, then what's the point of propping them up with subsidies?" another econ major pointed out. Based on the experience of a classmate, he suggested the company's Asian subsidiaries might be better at adapting to market realities, including the potential new reality of a price on carbon. I didn't get to ask the opinion of the college's brand-new chef, Chef Dan, who served our salmon and tiramisu. Apparently he had been an engineer at GM for 20 years before taking an early buyout and going to culinary school.