The Trouble With Suze 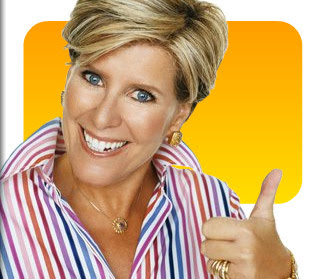 Generally, I think my fellow Yahoo! Finance Expert gives pretty solid financial advice. Sure, she's compromised somewhat by her endorsements like MyFICO.com, but she seems to genuinely care about helping people, the opposite of an irresponsible clown like Jim Cramer.

However, after reading her profile in the New York Times Magazine, I realized that I think her priorities are totally screwed up. She seems to equate financial security with being rich.
I mean, maybe this is obvious, since she wrote a book called "The Courage To Be Rich." But really, that's BS.

If we learned anything from the past year's fiscal insanity, it's that financial security, financial integrity, and financial freedom have nothing to do with having a ton of money. You have financial security if you are able to cover your basic expenses and save for the future. You have financial integrity if you're not fronting by buying a bunch of crap you can't afford while neglecting your future. And financial freedom, for life, means the ability to live well within your means. They are relational values, not absolutes.

Ok, you might argue that "basic expenses" requires a certain dollar value per year, but I think it's all contextual. You could live on the beach in Goa for $10,000 a year, and as long as you manage to play enough guitar to clear $11,000 in tips, presto, you have financial freedom.

This was the part of the story I found the most galling:
"She has been reluctant to work on school curricula on personal finance, because she says students can’t learn empowerment from people who aren’t empowered, and teachers, she says, are too underpaid ever to have any real self-worth."

Seriously?? Suze is suggesting that people who go into teaching aren't empowered and don't value themselves because they're too big of losers not to become a stockbroker or a TV personality like she did? Teachers, who do the most important job in our society, have no self worth because they're underpaid? Ok, I might agree that they're underpaid, but in point of fact, in most places in the US they make a solid middle class living, with security and benefits that are unheard-of in most careers. Teaching is an enviable career to a huge chunk of the American public. This is incredibly out of touch.

Suze's right about one thing: young people shouldn't be learning about personal finance from her.
Posted by Anya at 7:25 PM

Well said! My husband is a teacher and he certainly isn't unempowered. We both value his career and contributions.
I've been noticing discord between my financial values and Suze's for some time now; and I think it's time to take a couple of her books that I own for resale at the used bookshop. Thanks for the nudge!

Wow. My Dad is a teacher and so is my best friend. They both have more job security and better pay & benefits than I've had in the 5 years since I graduated with a BA in Psyc. I've been through 2 re-orgs and had to fight to make less than a living wage. The most I've ever earned was $15. per hour. My corporate mc-jobs have sucked worse than I could have ever imagined possible. Teaching is not a bad gig. But then again, I live in a large metropolitan area where they get paid really well relative to the rest of the country.

Thanks for this really informative post........Keep it up.

Suze Orman has always scared me. She gives bad advice and gets it wrong many times. Evidence her comments on teachers above and mistakenly telling the public that credit unions aren't federally insured institutions.

Thanks for sharing this informative blog with us.

I came across your blog last night, and posted a response to Orman's comments looking at teacher salaries and US income distribution on my own blog: http://tedmajor.net/?p=29

Thanks for the lead.