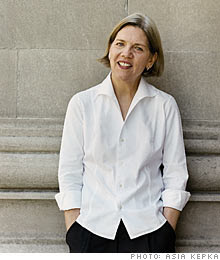 Thanks, James Scurlock (the Morgan Spurlock of debt) who wrote a great piece about why Elizabeth Warren is so awesome. She gets what the real problem is: the financial system was profiting on the backs of American families. We're not going to be able to fix it or prop it up as long as people can't pay off their credit card debt. In fact several rounds of defaults are still looming.

And that Ms. Warren would be attacked and berated for it by a usually incredibly smart and savvy financial journalist on a podcast, Planet Money, that I listen to every week is kinda bewildering. What I heard NPR's Adam Davidson say last week is that Ms. Warren is improperly imposing her "out of the mainstream" views on a process, the TARP, that is supposed to be led by sober "elder statesmen" (yes, he did say statesMEN--unfortunate choice of phrase). But her ideas should not be out of the mainstream. They are the new mainstream. She belongs to a select group of economic observers who warned that a day of debt reckoning was coming--not with scary voodoo or black swan hocus pocus but in plain, sober, easy-to-understand terms--"the problem is as much a credit crisis as a slide in conditions for average American families."

The Two-Income Trap should be required reading for Tim Geithner and crew.
Posted by Anya at 3:17 AM

The good news is that Prof. Warren's ideas are being or about to be implemented in the credit card arena. She's a hefty thinker, but probably not out of the mainstream from a consumer's point of view. Out of mainstream if you are in the financial services sector.

i did a google image search of her. she looks to be in very good shape and appears to have a mighty fine looking ass. i hope she doesn't get near arnold shwarzenegger, he likes to grab on when you least expect it. he hasn't grabbed maria shriver's ass in quite a while.

I talked to Paul Mangwana over the phone and I know NSA. GOV was listening in. Professor Warren is reputed to be hot in bed.That is why she has been so outspoken and assertive with regards to the world financial Titanic hitting an "iceberg" and plunging the world financial system into an abyss.Arnold Shcwarzenegger was pals with some of the Enron people.He would not be able to handle soembody as hot as Elizabeth Warren. Although, there are rumors nt he net that Maria Shriver and her cousin Caroline Kennedy are sharing the same bandolero linked to the Sandinistas. The rumors claim that both these women are hard to handle and that men get worn out by their demands. Professor Warren would tear Arnold to shreds in bed...

Elizabteh Warren is in competition with Diane Sawyer. During election eve in 08, she had an ABC camera man follow her ass in the studio so he could broadcast some good ass shots of Diane Sawyer. She likes having her ass cheeks spread open during cunnilingus from behind as well as anilingus. Diane Sawyer loves having the meat of the ass cheek that surround the anus pleasured with the tongue. She has a younger man who loves pleassuring women.
Professor Warren seems to be in good shape and it would probably be lots of fun to tickle her with the tongue while pleasuring her vaginally and in the anus. Diane Sawyer was one of the sources during the Watergate years. Alexander Haig took some very dark secrets to his grave. He knew that Richard Nixon and Diane Sawyer were having a fling and that Diane Sawyer and Bob Woodward were smoking pot together before getting it on. Diane Sawyer is hot southern woman who loves to get it on in bed after a strong joint. She still smokes pot. I'm sure that Elizabeth Warren is also a closet pot smoker. Elizabeth Warren is known to secretly grow her own pot plants at home.

Maria shriver and Caroline Kennedy are also closet pot smokers who share the same man. They love to get high before having cougar sex. Maria shriver keeps various varieties of pot plants in a secret home a few miles from her home in LA, possibly Marina Del Rey. Caroline Kennedy has the pot flown in from the west coast via a private jet that is kept at Santa Monica airport. Nobody knows who owns the jet or who owns the house where the pot is grown. There are rumors that a retired pharmacist with a long history of drug use and good connections going back to the 60s has something to do with it. He is rumored to be living somewhere in Playa Del Rey and is an acting pot plant consultant for both Maria Shriver and Caroline Kennedy. There are rumors that Torrance airport has yet another jet where the pot is flown to Caroline Kennedy. They are not trafficking the pot. They share the pot with their cougar friends to get high before sex.

Elizabeth warren for president of the USA!
Our country needs a smart women's vision, honesty, knowledge and the moral imperative she exudes. The time for real change is now. The banking industry is run amok with hoodwinking ways that must end immediately and they must be kept in check with an objective oversight, one that is ensconced in every consumer financial policy making decision. Regarding contracts, one page of information- written with zero obfuscation- is all that is required; simply state the terms. Greed is poisoning our nation, usury is an instrument of Zionist gangsters. Wake up America and end the pillaged.