Bipartisan, but united in greed... 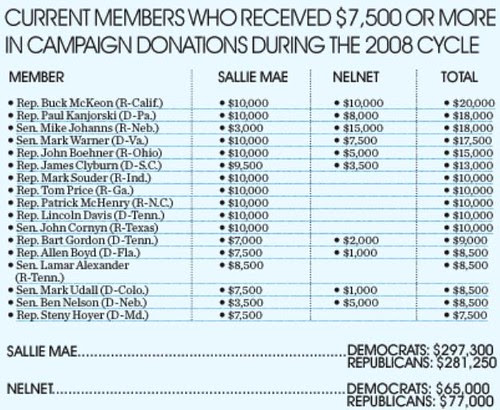 Obama wants to save money by cutting subsidies to banks and thus eliminate the FFEL in favor of Direct Loans, which are much cheaper for the taxpayer. It was tried under Pres. Clinton and failed because of political flimflammery.
These senators and congressmen, the recipients of thousands in lobbying money, oppose the idea.
Even though the entire function of a bank-provided student loan program has been rendered hollow and absurd by the current credit crunch and the collapse of securitization. Banks have been pulling out of the program by the dozens. On top of the normal 95% guarantee, the federal government has made available TALF funding to buy up student loans to the tune of up to $200 billion. If Obama's proposal succeeds, this bailout money can be used for its other purposes--credit cards and auto loans, for example.

via TitaniumDreads, via Future Majority;
Posted by Anya at 1:39 PM