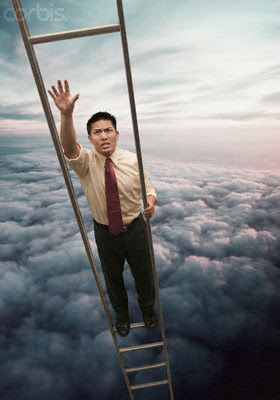 The "Joe the Plumber" who became famous for 15 minutes during last night's final presidential debate may have been a Republican plant. He's not a licensed plumber and his name ain't Joe.

But I think the debate over him actually showcased a genuine philosophical difference between Republicans and Democrats about taxation and individual wealth.

Joe has made a lot of money and he wants to expand his business and employ more people. He doesn't want to be punished for his success with tax increases. Obama replied, "It's not that I want to punish your success. I just want to make sure that everybody who is behind you - that they've got a chance at success, too," and he ended with an exhortation to "spread the wealth." This is a statement that was mocked by McCain as being "redistribution of wealth."

No matter how much Obama keeps saying he's going to cut taxes on 95% of Americans (which is definitely a bit of a pander, I have to say), that particular part of his proposal doesn't seem to resonate with a lot of people. On the one hand, the struggling, working class lady profiled in The New Yorker last week just didn't believe that Obama could raise enough money to right the disastrous budget by increasing taxes ONLY on the top 2%, even though that 2% currently earns one-eighth of the national income.

"“How many people do you know who make two hundred and fifty thousand dollars?" ...
The circumstances of Snodgrass’s life made it impossible for her to imagine that there could possibly be enough taxable money in Obama’s upper-income category—which meant that he was being dishonest, and that she would eventually be the one to pay."

On the other hand, a law student who came up to me at Hofstra the other day had the opposite problem supporting Obama's plan. He happens to know quite a few people who make $250K. In fact, he aspires to make that much himself in a few years. "Who's looking out for the young professionals?" he asked me. Well dude... young white men with law degrees are not first in line for anyone's sympathy in hard times. Even when they have $150K in student loan debt and may never be able to buy a house.

One significant obstacle we face in this country is that the poor people feel poor, and the rich people feel even poorer. In fact, here in New York City, people who make more than $200,000 a year are the MOST likely to say that they feel that they're falling behind economically. It seems crazy, but that's because inequality and income distribution has gotten so skewed over the past 25 years that the richer you got the more people just above you were making, and their income was growing faster than yours was. It's all relative.

The way out of the madness is, precisely, the redistribution of wealth--aggressive, progressive taxes on income and especially on investments and wealth, to bring these two ends of the spectrum closer together, and to create a social safety net and more economic security for everyone. I intend to vote that way and to support that even when (if) I nudge into the bracket where it becomes against my own narrow economic self-interest to do so. In fact, I don't think it is even against my self-interest. I don't ever want to live in a country, or live a life, where $250,000 a year doesn't feel like enough.
Posted by Anya at 8:25 PM

If you truly believe this: "The way out of the madness is, precisely, the redistribution of wealth--aggressive, progressive taxes on income and especially on investments and wealth, to bring these two ends of the spectrum closer together, and to create a social safety net and more economic security for everyone" then please be honest with yourself and everyone else and call yourself a Marxist/Socialist/etc.

ummm what makes you think that wealth is just going to stand around and take it? I thought that part of the argument for the laffer curve was that excessive taxes will drive capital away to other contries. additionally consider the disincentive to save higher investment taxes creates for everyone.

in fact don't highly progressive taxes discourage work? why work harder if its going to be taxed at ~45%? (fed,state, muni, soc. sec.) this is at the root of why so many upper-middle class folks feel so poor, they are paid better, and many of them work much harder to earn this higher wage, but come april 15th much of this is taken away. after you consider all the extra time/effort they spent earning the money, they may have been better off not working to earn that extra marginal dollar.

that's really not a solution.

Hi Anya - I applaud your blog! I too want to live in a country where people treat others as they would like others to treat themselves...this is the basis of rational law and economics too. I am a businessman and I choose only to trade with people I trust. It makes good business sense. And I have no concern for how wealthy they may be. If I was poor (and I am very fortunate to earn more than $250k per year) I would hope my fellow citizens would still trade with me, respect my integrity and may think to give me a hand at a time when things are tough. I am a far richer man doing what is right...
A fellow traveller

I always save my money because we never know what will happen in the future.

It is a right thing to give a little to poor people. We all should be equal to understand each others' importance. How rich presidnet would know what his people want? He needs to relate somehow to understand our needs.